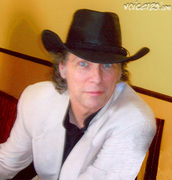 Even before I first got into this business at age 16 doing radio, my goal at that time was to go to the Mel Blanc School of Voice Characterization in Los Angeles. I too was a young boy from Ohio - Cleveland, in fact. It was $600 and 3,000…"

Thanks for contacting me. Hope you're doing well. Sorry but I've been off line for a while...so busy I don't have time to think anymore.

Stay in touch! Hope you had a nice 4th of July holiday. All the best!

Nice to meet you. Great pipes! Congratulations on all your successful endeavors. How coincidental to see "Transtar" among your credits. I remember doing promos for Mike Harvey and Super Gold many years ago. I've spoken to Mike on the…"

Welcome to the "Universe". Glad to know you. Thanks for the contact. Here's wishing you all the best. Write me anytime. Looking forward to future chats. Till then...

Thanks so much for welcoming me. I've met a lot of nice people so far, and am looking forward to participating as much as I can. I'll also be monitoring your discussion group as well. Take care my friend...all the best!

"Thanks again buddy! Say, I meant to compliment you on that great site of yours. Love the picture and the demos! Great work!

Thanks so much for the kind welcome. In the short time I've been poking around here, I've chatted with some very nice folks. I'm glad I've found a place where like-minded individuals can get together in a friendly atmosphere and "bat…"

I can't believe I actually found someone that feels the same way I do about Pro Tools! You summed it up succinctly in the very first paragraph - just the way I do, when people ask ME about the software. For me, Sound Forge is good enough…"

"...just in case you HAVEN'T been over there to look at it."

Nice pictures of your family by the way...

I just wanted to let you know I posted a comment to your question that you submitted a while back...just in case you have been over there to look at it. If you need any more help with anything, feel free to let me know.

"Terrific! Thanks Penny! Judging by the photos...it looks like a lot of fun. I'll talk to you again soon. Let me know when or if you'll be in the Miami/Ft. Lauderdale area with your workshops.

I just wanted to let you know that I enjoy every one of your discussions. I learn something new every time I read one of your postings - and they're all over the place! Thanks for your informative insight into the industry in general,…"

I just wanted to say "Hi", and tell you how much I've enjoyed visiting this site in the last week. I've met a few very nice people already, and it's been a very positive experience. Not only is it a great place to network, but folks…"

"Ha! Ha! Ha! I've never gotten so many comments about that hat...didn't think it wouldn't draw as much attention as it has. Perhaps I should consider marketing IT...instead my "voice". Seriously...thanks. I don't normally wear "cowboy" hats - usually…"

"Kudos to you my friend. You've certainly earned my respect. When I was coming up in the old days of radio in the '60's and '70's, I would have given anything to work at that station; but as an 18 year old kid, I was too busy trying to understand how…"

"Thanks for writing Rosanne...

Even after 40 years in this business, I still have a lot to learn. Believe it or not, I learn a lot of it by helping others. I decided years ago that I would NEVER charge for any services or advice that would help…"
More…
Loading ...

40 years in radio & television broadcasting - production and "on air" - Cleveland & Miami/Ft. Lauderdale. I was also the "Signature" voice for the PBS affiliate - WPBT Channel 2, Miami for many years. From rock in Cleveland, to country, AOR, AC & News in South Florida. I've also been a program director at several country stations. I'm currently writing several screenplays for motion picture film & television. Radio & Television commercials, web audio, on-hold messages, voice mail & I.V.R, network promos, news openers, image liners, cartoons..."in-store" production for Walmart...you name it! I've done it all. From the 4 Seasons Hotel in Miami, to Lexus of Manhattan in New York...from regional McDonald's spots and Armor All Products, to your local pharmacy in middle America, my voice has been heard in 100's of markets in thousands of cities across the country, and even outside the country - (Canada, Bermuda, & the Bahamas - including work for the Bob Marley Resort in Jamaica.

Most recently...a fitness video with Jessica Simpson. As a producer for a South Florida media company, I'm involved in a variety of productions on a daily basis - for web audio, broadcast radio & TV, I.V.R. recording, on hold advertising...you name it... I also do miscellaneous projects from my home studio.

I have a warm, deep and serious voice for narrations and promos, a sultry and fun voice for commercials, a smooth and professional approach for corporate presentations or documentaries, oh...and don't forget those "Wacky" character voices...even a woman's voice! I can sound like an "announcer", or the guy next door.

Part of my many character voices - a little Irish/Scottish brogue, country, Mexican, and a bunch more...