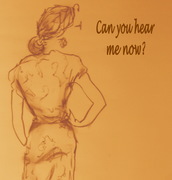 "Hey, Ben! We both need to get more active on VU! It's a HUGE resource. Check out the character voice consistency discussion. It's interesting."

"Hi, Juliette! I saw your post about narration demos on the Marketing group page. (I LOVE that page!) Be sure to have a "how to" cut on there! And it's my opinion and producers I've worked with) that no one will listen to ANYTHING over 2-1/2 to 3…"

"HI! Thanks for the add! New Jersey, huh? I look forward to hearing more about your VO work and the industry where you are. Keep in touch. I haven't been on VU much lately, but will be more active now. I've missed it!"

"Hey, Zurek! Thanks so much for your commitment to all of us in the VO industry! Setting up VU was a fabulous gift to all - I just wish I had more time to interact! But wanted to thank you so much for the recent blog/post on "Taking Care of Your…"

"Glad to be a part of the group! I've been out of pocket for a few weeks - but ready to rock and roll in 2009! And Positive Thinking is my primary key to success. Thanks, Peggy - for all that you do!"

"Thanks, Penny! After an especially challenging week I really needed you big TEN list to get me back on track. It's amazing how powerful we can be if we approach our work and life in a positive way."

"Thanks, Penny! So great to hear your story. I just returned from Orange County where I visited my almost 3-year old grandson and 5-year old granddaughter. Unfortunately, I was teaching an acting workshop the entire time I was "visiting" and did not…"

"Ryan - thanks for adding me as a friend! So we're both here in the crazy Metroplex - along with Benjamin Dane and many others trying to carve out a place in this business in such a challenging area. (FYI I am originally from Ft. Worth - moved to…"

"I am so glad you started this group. I am in the same boat as Kim in that I am not new to VO work but new to ADR. Can't wait to hear more and get some of my ??? answered. Thanks."

"Hi Conchita! Thanks for adding me to your list! Hope to have the time to share some of what you do. You sound just terrific. The only problem with this site is that I sometimes can't find the time to get back to the great networking available here!…"

"Lee! How great to see you on this site. I've missed seeing you "in the flesh" - ooooh! Does that sound provocative!? Let's mix it up around here!
Talk soon!"

"Hey, Deby - a little more estrogen to keep everyone company. A little balance for all this insanity! Look forward to chatting."

"Rodney - just wanted to let you know that I ordered your book!! And it is absolutely fabulous! I ordered it after coming across your vocal warmups, but I'm finding that there is great info in there on virtually every aspect of the industry. In…"

"Appreciate your quick response. Yeah, this site is wonderful. Has really been the kick in the b- - - that I needed to inspire me. I'll be doing my character demo very soon - and I hope you'll check it out on my site when I finish. And - terrific…"

"Dave,
Your demos and promo materials are outstanding! I'm getting back into the VO thing after being away for many years. Good studio finally starting to come together. I am a full-time, professional actor with lots of coaching, stage and television…"

"Thanks! I will send you some info very soon - just got some great feedback as having a "julie andrews" sound in an audition I had. Will send later in the week! Too many people in the USA think that sounding "British" needs to be b-r-o-a-d!!! Not at…"
More…
Loading ...

I have been an actor and drama teacher for the past 20+ years, including 8 in public school plus many years teaching in professional theater schools and area colleges. I have also worked from time to time as an acting coach and dialect/public speaking trainer. I recently officially left the classroom (YES permanently) to dive back into the entertainment industry - HEAD FIRST! I have worked on stage, film and television projects, but my favorite work has always been out of sight, in the studio, facing the microphone. Been doing this since I was 14, when I started as a studio background singer, recording artist in my own right, and general "do-it-all" performer at my local studio. Hope to get lots more fun work!

Several political ads for BOTH parties! An ongoing project is the Louisiana State Museum System - online voiceover and voice for multi-media project at the Old State Capitol Building in Baton Rouge. Selected as the voice for the Women in Film-Dallas PSA project last year! Some industrial work for Walmart and for Texas A&M University has also come my way. Keep 'em coming!

English and just enough Spanish to get me into trouble!

Mellow, smoooth (like "velvet" it has been said) with lots of energy and passion, but can be direct and clear and have a sarcastic edge if needed. Lots of voices "in my head" - just need to set them free!

Standard British, cockney, Irish, great Texas dialect (harder than it seems to "outsiders" :-) many more regional U.S. or European with a teeny bit of prep time.