"Hey Ms Lady everythang is good thanks for checkin on me.....Hope everything is good with you?"

"Thanx for linking with me ....love your work....we have to work together somtimes .....I think it would cool."

"Hey I love you guys over there I've actually have done work on choice FM....I can't wait to be in that market again ...maybe you know some poeple that need my sound ?"

"I am so glad that we can hook up like this....remember paint the picture that you want your life to be ....then put yourself in the picture."

"I listen to your demo's they sound great lots of swag and versatility...one day we will work together...soon."

"What up boy ....you through me off with out your glasses sometimes ...but whasssssapppnin?" 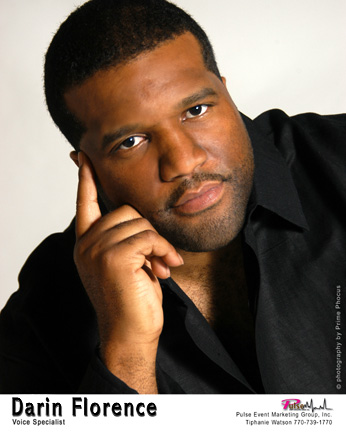 A formidable contender in the grand scheme of creative production, Darin "Postman" Florence has been the voice of radio ads and commercial production for years. He got his start under the auspices of one of the industry's most respected mainstays in the production arena, Mitch Faulkner, and under his tutelage Darin has parlayed his priceless talents into 90% of urban radio across the country and abroad. His ability to vocally adapt to any dialect and to technically navigate some of the most illustrious commercial accounts, make him a virtual one stop shop for perfecting voice over jobs and overall commercial production. He would soon create an official look for his 'one stop shop' and call it Postman Productions. The embodiment of all things necessary when placing your product on the mindsets of the consumer, Postman Productions is audibly unforgettable. Keeping to the highest standards of quality and distinction that a production house can provide, Postman Productions delivers the best in signature voice production, commercial production for radio and television, including radio drops, promos, and station identifications; in addition to retail and station imaging and the production of movie trailers. In existence since 1994, Postman Productions boasts a collection of high profile clients such as Home Depot, Crawford Communications, Infinity Broadcasting, Coca-Cola, Island Def Jam, Laface Records, Jive Records, Lidrock, ClearChannel, Radio One, Cox Communications, FUBU, Phat Farm, and Ludacris' Disturbing the Peace. Darin Florence has expanded his knowledge of radio as he has worked behind and in front of the microphone. His experience has lent him the opportunity to work in radio syndication as he produced shows like, "The Larry Tinsely Show," and in production at Atlanta's former Hot 97 (presently Hot 107.9) and the number one station in the southern region Atlanta's WVEE V-103. As if this were not enough "The Postman" further explored radio by taking on a radio show and received more notches on his production belt by becoming an on air personality. It is quite apparent that there is nothing audible that Postman cannot handle as he continues to affect his market daily via the World Wide Web. Check the website for further details www.postmanproductions.net