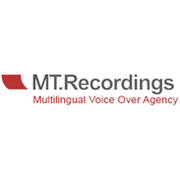 Many thanks for your nice birthday whishes!

Many thanks for your nice birthday whishes!

Many thanks for you nice birthday whishes!

Thanks very much for your greetings ;-)
Very nice from all of you!

Party will be in Munich, Germany.
You are welcome to join and we could have some Bavarian beer ;-))

Thanks very much for your birthday song ;-) Very nice!

"Hi Dan, thanks for informing me about your interesting group! I just joined it ;-)

I wish you a merry christmas and a great new years eve!

thank you both for your nice words ;-) Yes, I think that's a great place here! Very nice platform for people working in our business!

Well I am not a voice actor who speaks 65+ languages ;-) I have an multilingual voice over…"

As a multilingual recording agency, we provide voice over recording and dubbing in more than 65 target languages from every continent for your multimedia and audio projects - from audio books in the most common world languages to E-Learning courses in eccentric, exotic languages. We are always searching for professional voice artists (with own studio) to be qualified for our Partner Pool (which is free of charge). For more information please visit our website at www.mt-recordings.com