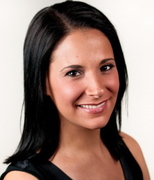 "FRESH. YOUNG. SMART." Those are the words an ad agency casting director used to describe the voice of Josey Miller. Whether you need a voice that's sexy, fun, sweet, hip, smooth, soothing or playful... a voice that reflects the nurturing warmth and wisdom of a young mom... an upbeat late teen, 20- or 30-something... the professionalism of a bright businesswoman... even vampy vixen or hipster... you'll find it with NYC-based voiceover talent Josey Miller. After studying in-the-booth voiceover technique through NYU several years ago under a fantastic coach, Josey Miller has gone on to do work for LifeMinute.TV, including spots for Pantene, Maybelline, Visine, and many other popular brands. She also voiced a spot for Starbucks/BBDO, one for Gogurt/Saatchi, and she's the TV and radio on-air talent for TripAdvisor. In addition to years in radio, TV/Web video and as a singer, she's also gone to great lengths to make clients happy while in advertising client management and as a freelance travel writer. And, in addition to studying under Joyce and Byrne Piven at their famed Piven Theater, she recently wrapped a play at the Manhattan Repertory Theatre. UPDATE: Live Nation just cast Josey Miller as radio promo voiceover talent for a national concert tour.

English is Josey Miller's first language. She also minored in Spanish (and lived in Spain to study the language more closely).

I do younger voices, I'm happy to experiment with animation characters, and I'm from the Midwest if you're seeking that dialect.