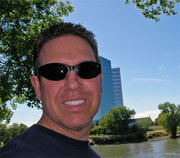 "Anne, all the positive energy I can muster is being sent your way.   Stay positive, and get yourself a copy of Lance Armstrong's book "It's Not About the Bike: My Journey Back to Life ". It did wonders for me during my battle with the Big "C". …"

I'm looking forward to finally meeting you at your VO workshop on the 26th. It'll be a great day for VO learning.

Have a great weekend.

"Ann -- I'm not quite sure what has been the most valuable ROI, but for me networking, persistence, practicing, training in areas of acting, voice as well as VO, and just plain getting out there and doing has been my course of action in the past…"

"DC -- How could I forget DC. A Secret? It sure seems like that at times.

Ann- DC works in the Sacramento area as well as in San Fran and LA. I highly recommend talking with him if you have questions about performing VO in NorCal.
Also, I've taken…"

"Ann -- Thanks what we are here for. To help each other to succeed.

One person you might want to check with is JS Gilbert. He is from San Fran and has a wealth of info with regards to the VO business in that area. Also, Bob Bergen teaches at…"

"Ann -- Although some of the best VO coaches and talent are in the So Cal area, the Northern Cal area has its share of some great folks to train with as well. Check out the list of resources from The Art of Voice Acting website for a number of places…"

"Crispin - Thanks for coming back to Sacramento and attending the From the Land Beyond event. Your 2 hour panel was great. Its always interesting to hear you talk about Anime and about your craft. I hope you come back soon."

"Rodney - Yeah, let me know when that episode of Monk airs. I'd love to watch it.

I would still like to see if we could get you up here in Sacramento one of these days to hold a workshop. That would be very cool. "Awesome Rodney! Is there no limit to your talents?
I hope we get to see more of you on camera."

"Bob -- Sorry to be a bit late to the party on this one, but this is a great Behind the Scenes with you and Billy West. I met Billy last year here in Sacramento and he was a real great guy. It was very cool to see the two of you guys talk about the…"

"Randy, Thanks for posting the link to your book. The site looks great and the vid is awesome. It's great that someone in your position is willing to share your VO knowledge to the rest of us. I'm looking forward to reading the book.

"Penny -- What a great Mother's Day message. It sure got me thinking a bit.
I want to thank you for the free gifts for being a member of your Positive Thinkers group. There are some really great e-books and audio links at the site you sent me.

"Joe -- Thanks for the comment back. You are a "Stand-up kind of Guy".
Sorry, I couldn't resist.

"I built the new studio as a "stand up" booth. "
I'm suspecting that is the reason for the second cinema display above the lower one. I was wondering if…"

"Very Cool Penny. You are such a giver.

"Joe - Very cool video. The studio looks great! You certainly make those live ISDN sessions look fun and easy. Thanks for giving a peak into your world.

I do have a question fer ya. To sit or stand during a VO session?
In the majority, if not all,…"
More…
Loading ...

I'm a SoCal native currently living in NorCal working on making it to the big show one step at a time. My acting back ground includes some stage acting and various VO spots. I have studied with Pat Fraley, Rodney Saulsberry, Julie Williams, MJ Lallo, Eric Stone, Susan Hayward and many others. I'm always looking for another excuse to learn something else either in life or in acting. Oh yeah, also I've served in the US Marine Corps, been around the globe a time or two and am a full time Geek. But, VO is my passion and I want to learn and be part of very aspect of it.

The Voice of Jon Morss Now The New Voice of Northwest ENERGY STAR HOMES". From GenX to Geritol, Characters or Straight, offering a natural voice that is Smooth, Soothing, Calming, The Guy Next Door, yet Upbeat, Hard Hitting, and Energetic for those not so intimate times. Based in Sacramento , CA but serving the world. You will not be disappointed.