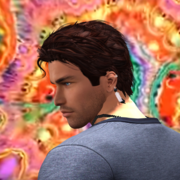 "Hmmmm.... you look and sound familiar!  LOL --- See! I told ya there are lots of friendly, supportive, great people here.  VU is a wonderful place to network both locally and worldwide.  I am so glad you are here!  Welcome to a universe of wonderful…"

James Eastman began his career on stage at the age of seven. Through the years, Eastman continued to act in theater, then took on the highly demanding responsibilities of producing, directing, and coaching. Radio opportunities provided a unique insight of learning the broadcasting business. James found himself writing copy and voicing commercials. For him, it was theater on a tiny stage but with a vastly bigger audience. Having a critical ear, creating sound design came very naturally for Eastman and he richly exploited that talent in his theatrical work, radio broadcasts, and in movies for which he is presently nominated for an award in Sound Design. For the past 12 years, James Eastman has been the consummate voice actor appearing in hundreds of computer animated features made by independent studios from around the world. _

Dialects: James replies, "That depends on the alcohol content. There is a direct correlation you know." Characters: James asks, "Who would you like to like to meet? Let's walk over to my closet. Here is the key. Oh, yes, I do keep it locked... but you may go in there. I'll just wait out here." Impressions: James says, "Always endeavor to make a good one!"

It is believed that Mr. Eastman's equipment was stolen from Area 51, Warehouse 13, and the Roswell Alien UFO crash site. When asked about his equipment, Eastman would only say, "It is out of this world!"