"thanks so much for the b-day wishes!"

"thanks so much for thinking of me!"

"thanks so much for your wishes!"

"thanks for your interest!" 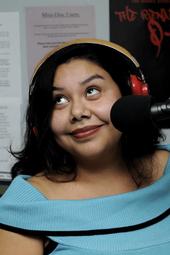 My instruction began at the Illinois Center for Broadcasting under Rich Renik, and David Finny. Held a six month internship at Bosco Productions where those skills flourished. While still studying my career began at 750AM with a bi-lingual morning show. During that time, I volunteered for CRIS Radio at The Chicago Lighthouse for the Blind. After that shortly I became the Producer, On-Air Reader, Board Operator and Outreach Assistant. My talents include a range of accents, and successfully portray emotions, On-Camera work, and excel at audio imaging & production. 2013-2015 News/Wx/Traffic,and board op for WCEV. Also worked independently with Brokerage Producers for production and board operations.

Had much work with all the independent producers.