I just saw the video you posted of your new studio. It's looking great and practical!

"Thanks for the add.

Funny, we have done work for the same clients. You did the voice-overs and I created and produced the first Hispanic singing Jingle for The Shop at Las Americas and also did the Viejas Outlet Center singing Jingle in…" "Thanks for the add Jody,

Sure, I will contact you whenever I have a Jingle or voice-over in English.

Thank you for your message. Glad to hear from you.

Happy Holidays to you too!

"Thanks for the add and e-mail comments!

I checked your website and it's very nice and Interesting.
Yes, whenever we need, we can work it out through MP3's and FTP.

Thanks for the add and for all your help during the years! 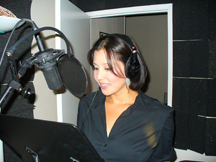 I'm glad everything went good in the event of the Holiday Magic CD's at Children's Hospital.

"Thank you. Yes, I will dive in little by little.

In our voice-over rooster in Spanish, we have several male and female talents with Latin American, Mexican NEUTRAL accents and others. Different types of voices to fit any kind of project: Commercials, Narration, Characters, IVR, e-learning projects, infomercials, etc.